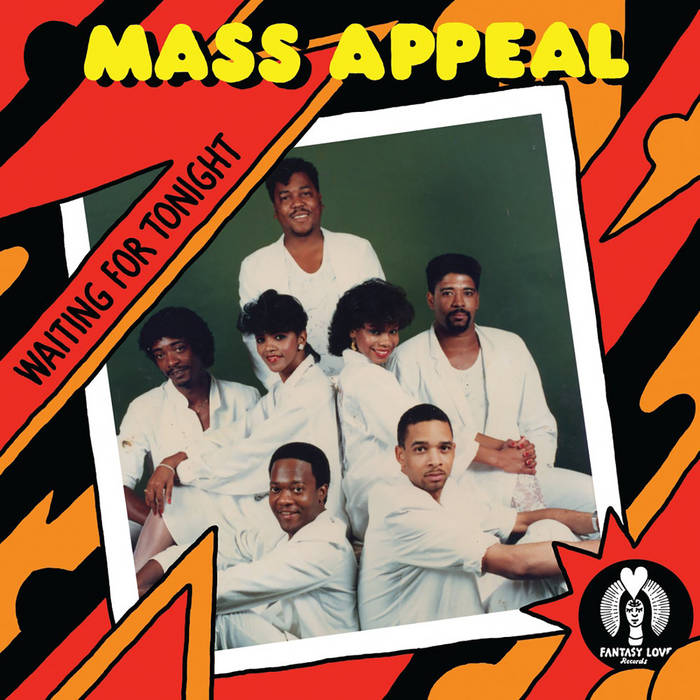 Mass Appeal, a 7-piece group, defined the sound of Atlanta in the 80's. Fronted by two female vocalists, the group secured reputation throughout the southern states via their live shows & original cuts, the first (& rarest) of the two which we have the pleasure to offer to you, a timeless funk/boogie track, 'Waiting For Tonight'

In the words of Homer H. Hammonds Jr. : My passion for music came from my parents. When growing up they would purchase the latest 45s on Friday and they would be played all weekend on repeat. Everything from The Temptations to The Supremes to Aretha Franklin, was what I grew up listening to. I didn't start to write music until I was around pianos in the practice rooms at Alabama State University (ASU). Being shy it was a place I could get away and I started writing there. One of my first songs was
'I've Got To Find Me A Way (To Your Heart)', young romantic. As far as performing, I've played the trumpet since 4th grade and was in R&B bands, but being shy i never stood out.

Mass Appeal came together after ASU, my brother in law Allen Cotton was in a band called 'Conspiracy' which I joined after university. After that band broke up we kinda morphed into the new group with some members of 'Conspiracy'. We usually had about 7 members. Valentino Clendenon on bass, James "Curly" Toleen on keys, Al Nelson joined on guitar, Deanna & Kim then Davita & Sharon on vocals, in two different eras. I was on keys, trumpet and background vocals. I came up with the name "Mass Appeal" as I've always been able to come up with catchy names.

We played the circuit in Atlanta and surrounding cities. The main strip was Campbelton Rd. where we played the Amvets Post, Leejohns, The Regal Room, EJ's. Club International in Decatur is where we played with 'Ready For The World' and other national acts. Stockbridge Country Club in Stockbridge, GA. was a favorite also. We played 3-6 times a month and were quite busy.

Back then you had record pools where DJ's would be given new records to break in clubs. We met Wali (Million Dollar Record Pool) through our managers Bill Thomas and Cofield who were, let's say, entrepreneurs or hustlers. They had connections and took us in Studio 2560, with Eddie Irons (of Brick) and we cut the songs with the help of our in house producer, Terry Dukes (Pebo Bryson MD).

We were just a local band and I don't think we printed over 500 copies of either record ('Waiting For Tonight' & 'Just A Dream'). We sold them at our shows and gave them to friends and family. BJ (Jean) Redmon sang the high part on the hook for Waiting for Tonight. She was never in the band but played an important part on that record.

The most memorable show would be a WAOK roadshow at Herndon stadium (Morris Brown College) where national acts would share the stage with local acts. Probably about 15,000 people. We were driven to the stage in two Mercedes Benz's and blazed the stage along with the Chapparals, Roger and Zapp, amongst others. After the band broke up in the late 90's I went on to be close to the 'La Face' camp when they came to Atlanta and was writing songs for Jermaine Jackson, Tami Davis, Toni Braxton and others, with my writing partner Bobby Jackson, under our management Platinum Artist. When 'La Face' left Atlanta we were left in contract limbo and left to find our way.............30 years later someone contacted me through Facebook offering to buy a record I'd forgotten about and here we are. I still write a bit and have hundreds of ideas and songs that I need to get back to. Time flies when you're paying bills. LOL!